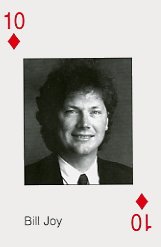 
Born 1954, commonly known as Bill Joy, co-founded Sun Microsystems in 1982 along with Vinod Khosla, Scott McNealy and Andy Bechtolsheim, and served as chief scientist at the company until 2003.

Joy received his B.S. in Electrical Engineering from the University of Michigan and his M.S. in Electrical Engineering and Computer Science from UC Berkeley. Bill Joy was the person largely responsible for the authorship of Berkeley UNIX, also known as BSD, from which spring many modern forms of UNIX, including FreeBSD, NetBSD, and OpenBSD. Some of his most notable contributions were TCP/IP, the vi editor, NFS, and the csh shell.

In the early 1980s, DARPA had contracted BBN to add TCP/IP, devised by Vinton Cerf and Bob Kahn, into Berkeley UNIX. Joy had been instructed to plug BBN's stack into Berkeley Unix. But Joy refused to do so. In his opinion, BBN's TCP/IP wasn't good enough. So he wrote his own high-performance TCP/IP stack.