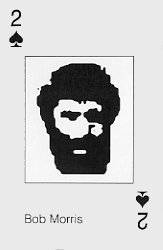 Morris had used both MIT's CTSS and Berkeley's time sharing system. Although working at Bell Labs, Morris, who considers himself a mathematician, played no role in the creation of the Unix system and its fundamental ideas. He was eventually attracted to the Unix project because he saw it as a positive step away from the "technological backwater" that he considered Bell Labs computing to be at the time. Although Morris joined the Unix community as a user, he made contributed much to its development.

Morris implemented almost all mathematical and arithmetic operations for Unix. He was responsible for the operations that take care of inputting, storing, and outputting dates. He also contributed, to the best of his memory, all fundamental service routines such as calculating sines, cosines, tangents, logarithms, and exponentials. He also developed the high precision DC calculator program.

Another of Morris's important contributions, although he considers it a side issue, is Unix's security system. Morris explains that Unix always had some form of security, but it eventually needed a quality password system. His answer was encryption. However, simple encryption was not enough because if the encryption algorithm fell into the wrong hands, the system was violated. His answer "was to find an encryption operator who would work in the direction of turning ordinary passwords into encrypted passwords, but extremely difficult to go the other route," from the encrypted to the unencrypted password. He acknowledges that, although he didn't know it at the time, this technique had previously been developed in England. Knowing that people would try to "...run whole dictionaries through the damn thing," Morris designed the password lookup to be as slow as he thought users would tolerate (one second). The results of his efforts, although not perfect, are pretty difficult to overcome. Also, the encryption of the passwords allowed for the passwords to be kept in the same file with other user related information.