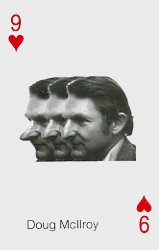 Douglas McIlroy is a professor of computer science, mathematician, engineer and famous programmer. He is known for having invented:

He earned a Bachelor's degree in engineering physics from Cornell University in 1954, and a Ph.D. in applied mathematics from MIT in 1959. Became head of the research department at Bell Labs in which Unix was born.

The history of computing at the Bell Telephone Laboratories Lecture (1997)