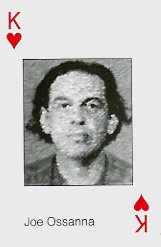 Joseph F. Ossanna (December 10, 1928 - November 28, 1977), received his BSEE from Wayne State University, Detroit, Michigan, in 1952. He was since a member of the Technical Staff of the Bell Telephone Laboratories, Murray Hill, New Jersey. He was actively engaged in the software design of Multics (Multiplexed Information and Computing Service), a general purpose programming system used at Bell. He also authored the first version of troff for Unix. He died of a massive heart attack while in hospital recovering from a first heart attack.

Troff was originally written in about 1973, in assembly language for the PDP-11, to drive the Graphic Systems CAT typesetter. It was rewritten in C around 1975, and underwent slow but steady evolution until Ossanna's death late in 1977.