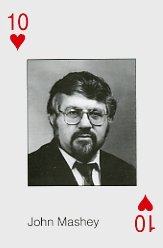 John Mashey is "an ancient UNIX person," having started work on it at Bell Labs in 1973, and continuing to work there for 10 years.