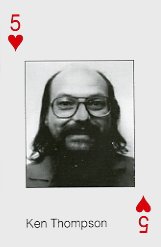 Kenneth Thompson (born February 4, 1943) is a computer scientist, notable for his work on the Unix operating system.

Thompson was born in New Orleans, Louisiana, USA. He received a Bachelor's degree and Master's degree, both in electrical engineering, from the University of California, Berkeley.

Quotes
* "The X server has to be the biggest program I've ever seen that doesn't do anything for you."
* "One of my most productive days was throwing away 1000 lines of code."
* "We have persistent objects, they're called files."
* "If you want to go somewhere, goto is the best way to get there"
* "When in doubt, use brute force"
Quoted from | Wikipedia

Unix and Beyond: An Interview with Ken Thompson