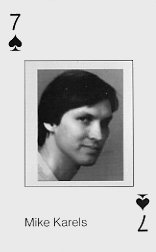 ke started his contribution to Unix with the 2.9BSD release which was distributed for the PDP-11. While studying for his biology degree, had had access to the department's computer and since the administrator of that PDP did not have enough time he started helping him and then making changes to the system, and in no time he was practically the owner of that computer. When he saw a related job posting for involving with CSRG (UCB Computer Science Research Group) in the BSD project, he decided to jump in.

Mike worked closely with Van Jacobson on a number of widely accepted algorithms in TCP implementation. TCP slow start and the routing radix tree are probably the most famous ones. Being a very down-to-earth person, Mike spends little time taking credit for this work, and on the other hand, uses every opportunity to mention the names of people who had in one way or other some role or contribution to the TCP/IP implementation in Unix.

BSDi software asset was bought by Wind River in April 2001, and Mike joined Wind River as the Principal Technologist for the BSD/OS platform where he still works on BSD/OS. Michael J Karels took over Bill Joy's responsibilities when Bill left CSRG, and was the system architect for 4.3BSD, the most important BSD release which was the base of the development for a number of commercial Unix flavors available today, including Solaris.

A Tribute to Unix and its People