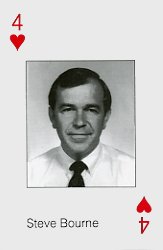 Steve Bourne is a computer scientist, most famous as the author of the Bourne shell, which remains the standard command line interface to Unix.

Bourne spent nine years at Bell Labs with the Seventh Edition Unix team. As well as the Bourne shell, he wrote the adb debugger and The UNIX System, the second book on the UNIX system, intended for the general public.

After Bell Labs, Bourne worked in senior engineering management positions at Cisco Systems, Sun Microsystems, Digital Equipment Corporation and Silicon Graphics. He is presently chief technology officer at El Dorado Ventures, a Menlo Park, California-based venture capital group. He is also the chair of ACM Queue's Editorial Advisory Board, a magazine he helped found when he was president of the Association for Computing Machinery.